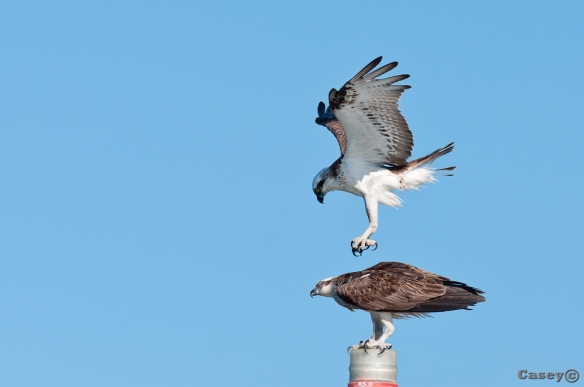 Little backrub to get her in the mood

While out on the water in Morton Bay off the coast from Brisbane. We stumbled across these Osprey that lived out in a nearby nest, on a channel marker. The Osprey circled around and attempted to land on the other. There was other locations the Osprey could have landed, so it was definitely a deliberate act.

Eventually the Osprey did land on the other, before taking off and circling around again. I can only assume it was part of a mating ritual or courtship between the birds. Now that I think of it, they probably think it’s weird human take their partners out to dinner, drink wine and go dancing 🙂

Looking at those outstretched talons makes me pretty glad I’m a human. 🙂 I was just happy to be in the right place at the right time to capture this just as the outstretch claws were exposed. I shot this with the Nikon 300mm F/4 lens, with a 1.4X Teleconverter on the Nikon D90 (1.5 x cropped sensor). So effectively making it a 630mm lens (Full frame equivalent).

Note: these are not the same Osprey.